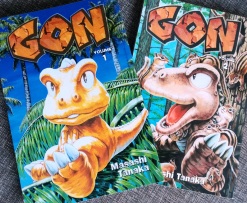 Gon is a delightful wordless manga created by Masashi Tanaka (Japan, 1962). Originally published from 1991 to 2002, it concerns the adventures of the titular character, a small, hot-tempered dinosaur who somehow survived extinction and now wanders all over the map of the tertiary period. It was serialized in short, self-conclusive stories. Most of them are in black and white, but there were a few color stories too.

like jungles, forests, deserts, etc. His motivations are pretty basic,  usually trying to eat or get some rest. However, circumstances always get in the way. Though grumpy, he usually ends up standing up for the more vulnerable animals, facing off against beasts often many times his size. He is basically a prehistoric superhero, since he seems to be incredibly strong and resistant. He also often uses his cunning to outsmart beasts like lions and bears. Though the conforntations can get a little violent, the mood is usually lighthearted, and there is a happy ending to every story. 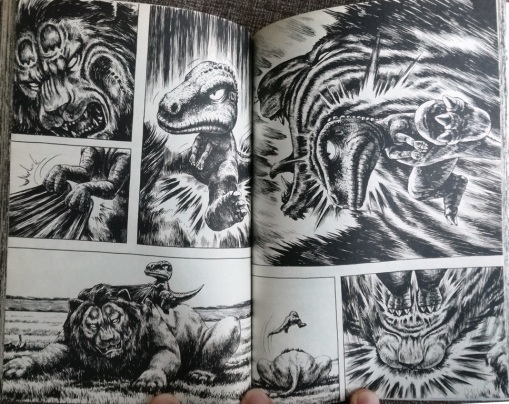 The artwork is incredibly detailed, and offers a fantastic balance between a realistic depiction of the environment, and the cartoony reactions of the characters, which are crucial in the absence of dialogue or narration. The action is very dynamic and over-the-top, and often very clever. At the end of each chapter, as a bit of educational trivia, there are painted portraits with the names of the animals featured in the story.

Gon has been published by various American editorials over the year, the latest of which is Kodansha. It is usually rated as a teens book, due to its alleged violence but it doesn’t get too gruesome and, in my opinion, is a great book for kids to learn about different animals and geographical environments by following the adventures of a cute, fun dinosaur.

This week’s wordless comic comes from one of the most unique creators in the medium today. Yuichi Yokoyama (Japan, 1967) comes from a fine arts background and, even as a kid, never had much of an interest in the comics medium. His switch to it, later in life, came through his desire to convey time in his work.

His comics are hard to classify, other than through catchall terms like “experimental”. They are not abstract per se, but they are not narrative in a conventional sense either. The plots tend to be very light, often not implying much more than characters moving from one point to another. “characters” is also used loosely here, since the people in  Yokoyama’s stories usually have no personality, and their dialogue amounts to little more than declarations of what they are observing or what they are doing.

This might sound dry, until you witness the design of the characters and the worlds they inhabit. On a deeper level, these might be vehicles for Yokoyama to comment on issues like nature, automation, virtual realities, or other postmodern concerns but, on a surface level, they are wonderful displays of creativity, all the more wonderful by the nonchalance in which they are presented.

remember, it is read from right to left!

Besides the character’s flat dialogue, Yokoyama usually makes masterful use of onomatopeias, perfectly integrated into the pages’ composition, to express rhythm and action However, Travel is one rare instance when he dispenses with visual signifiers altogether. The wonderful thing is that he uses visual cues  like speed lines or flashing effects to create the implication of sound, in a way that is a lot more direct and universal.

you can almost hear those ZOOM ZOOM ZOOMs!

The “story” mostly concerns a group of people barding a train, and all the stuff they encounter during the trip, both inside and outside the train, which seems to contain worlds whithin worlds. The travel eventually ends but, as the saying goes, it is all about the journey, not the destination.

Yokoyama was one of the early Mayor Montenegro influences. Originally, I intended the characters and world to feel as alien as the ones created by him. However, it turned out my own sensibility is perhaps a bit more conventional than his. What did remain, perhaps, is my drive for tell the stories in as propulsive a way as possible, never stopping at a single point for too long. His work remains a huge inspiration for me.

P.S. If you want to read much deeper and eloquent words on Yokoyama’s work than mine, check out the excellent series of essays Ryan Holberg is currently writing for The Comics Journal. Two parts are already up, with a third one supposedly coming soon.

As you can imagine if you’ve read Mayor Montenegro, I am a big fan of silent or wordless storytelling. As much as I obviously enjoy a well-written comic, I feel there’s a certain purity, and a lot of ingenuity, in finding ways to tell stories just through actions. It is in that spirit that I want to use this space to showcase a silent/wordless comic every week. 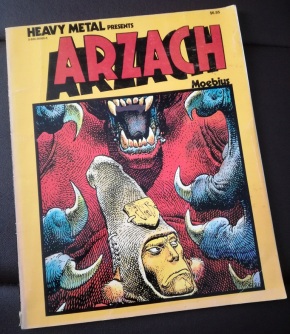 I want to start with a seminal work by one of the greatest authors: Arzach, by the legendary French author Jean “Moebius” Giraud (France, 1938-2012). He did a name for himself with his exquisite work with Jean-Michel Charlier on the western comic Blueberry, but it is better known for his surreal sci-fi fantasy work, either on his own (Hermetic Garage, World of Edena), or with collaborators like Alejandro Jodorowsky (The Incal).

It is in this surreal vein that he introduced his character “Arzach” to the pages of Métal Hurlant in 1975. The titular character is a mysterious fellow that rides a pterodactyl-like creature. Though the character was eventually used in more elaborate stories, these early appearances consisted on short stories with no dialog that usually ended in a comedic twist. Part of the charm lies in the contrast between the stoic nature of the character, and the fascinating and meticulously rendered world he inhabits, with the lighthearted release the twist provides.

It won’t take great deductive skills to figure out that this work by Moebius (already one of my favorite creators) has been a big influence on Mayor Montenegro. I don’t think it’s currently in print this side of the pond, but Dark Horse has been steadily reprinting Moebius’s catalog, so I’m sure there’s a new edition somewhere over the horizon. It is a must-have! 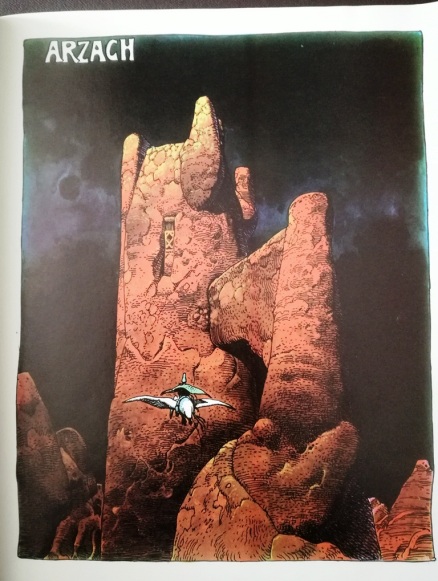 When I started publishing art as Guido-Visión, it was of a spontaneous, improvisational nature. In fact, the inspiration that led to Mayor Montenegro came to me when, out of the blue, I visualized Bucèfalo Quinto, Mayor Montenegro´s steed. The image of the rider was not as clear, but as soon as I had the chance, I put my idea down on paper, and I liked it enough that that first drawing became the actual first panel of the first Mayor Montenegro comic… I didn’t even know what the characters would be called at that point!

By the time I was working on the second page I realized this comic was going to be different. Where my previous work had been very direct and unplanned, I realized I’d have to start penciling before inking, and mapping out the story beforehand. It was almost an 180 from what I’d been doing before and I resisted a bit, but I also realized I’d need to evolve if I wanted to keep growing as an artist.

I also realized soon enough that Mayor Montenegro and Bucéfalo Quinto were not going to be throwaway characters. I fell for them almost immediately, and even before finishing the first story I was trying to figure out wat their next adventures would be. Some of them I have already produced, but there is still a lot more to come!